My nephew and Godchild, Bill, died on July 30 of complications of multiple sclerosis.

Nephew Willy, as I often (jokingly) called him, is perhaps the only person in my life that I’ve know throughout his entire life, birth to death. I remember the night he was born (depriving me of sleep before an important debate tournament when I was in high school). I’ll now remember the night he died. But I’ll remember much more of everything in between.

An illness that no one – and I mean no one, regardless of their previous acts in life – deserved.

But Bill did give back to us, both intentionally and unintentionally. Personally, he sensitized me on an eclectic number of levels: from the difficulty of maneuvering a wheelchair even in accessible space; to the idiocy of shoppers who leave shopping carts in handicapped parking spaces; to the serenity that forgiveness can bring, both to the forgiver and to the forgiven. He taught me that even in the most dire circumstances, a smile or laughter can ease tension and depression, if only for a moment.

Bill faced his illness with calmness, almost a resignation as to his body’s relentless deterioration. He was uncomplaining, and thankfully, without pain. With us, at least, he was unfailing in his appreciation of small things, and when he could still speak, “thank you” was perhaps his most frequent phrase with Don & me.

On some level, Bill is with my Mom now. During her final few months, Mom would often comment that she wished she could bring Bill with her in death. And she meant it. She knew that there was no hope for his condition. She knew that he’d be better off without his ravaged body. She was right.

In the next couple of posts, I like to remember Bill’s life, disability, and lessons learned. 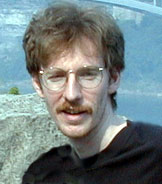