I’m a grandparent.  My daughter – my only child – gave birth on October 23, a little earlier than the little guy was expected.  Still, he arrived healthy and alert, and I had the pleasure and privilege of spending close to 2 weeks with the new family. 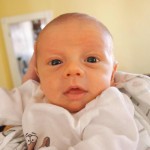 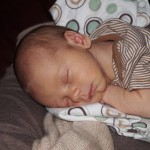 First, I’m delighted to see my daughter as a mother.  Her natural instincts are spot-on, and she’s visibly enjoying her new role.  She relishes Caspar’s every move, and is quite relaxed as a mother, despite her dearth of experience (she didn’t even babysit very much).  I think her relaxed confidence may be one reason Caspar is such a mellow fellow.  Even a month into it, and while I know she’s sleep deprived, she’s taking it all in stride.  I’m so proud of her attitude and her actions.

Second, I’m surprised at my own reaction.  I’m the type who buries her emotions and excitement until the last minute – if I’m going on vacation, for example, I don’t start really getting excited until a couple of days before departure.  I was the same way about the impending birth – I didn’t, wouldn’t, let myself get excited until it happened.  But nothing – not even pent-up anticipation – could have prepared me for the the feelings I felt the first time I saw Caspar.  I know I had nothing to do with his appearance (except contributing 1/4 of his DNA, I guess), but for some reason, seeing him, holding him, verged on miraculous.

Third, I vow to be a good grandmother – hopefully, a great one, but that’ll be for Caspar to judge at some future date.  I look forward to spending quality time with him, be that time in Baltimore, up here, or in Virginia.  I want to have fun with him, and teach him, and serve a role that parents simply can’t fill.  Caspar is quite fortunate – at this point, he has all four grandparents, and four interested step-grandparents.  All eight of us are thrilled.  He’s also so lucky that four of the grand/step-grandparents are within a few miles of where he lives, so he’ll get exposure regularly to a different generation.

In the meantime, I suspect I’ll be heading to Baltimore more often.  And perhaps bragging in this space a bit more often, as well.